This article adapts material from the main article: understanding the cycle decomposition

A permutation on a set

is a bijective map from

to itself. The permutations on a set form a group under composition; this group is termed the symmetric group.

There are many ways of describing permutations: one way is to give a formula for the function; another is to write the permutation down using the one-line or two-line notation. However, these ways of writing permutations down often fail to provide a feel for the dynamics of a permutation, and its group-theoretic nature.

The directed graph associated with a function

Description of the directed graph

is a set and

is a function. We define the directed graph associated with

The directed graph associated with

is neither injective nor surjective. Both

, leading to the vertex

having an indegree of two -- two incoming edges. On the other hand, the vertex

has an indegree of zero -- there are no incoming edges to this vertex.

In contrast, consider the function:

This function is bijective, and the graph clearly shows this:

The inverse of a bijective function

is a permutation, the directed graph associated with

and the graph of

. In other words, it is the starting point of the directed edge that ends at

. This suggests that if we reverse the direction of the edge, we get an edge sending

Another advantage of the directed graph is that it helps see what happens on iterating the function. To understand this, recall that to know

and flow along the unique edge emanating from

, we need to first reach

, and then flow along the unique edge emanating from that point. More generally, to find

steps along the edges of the graph.

The cycle decomposition: how it can loop back

We already understand the local picture for the directed graph associated with a permutation. Let's try to understand the implications of this picture more closely.

is a permutation (i.e., a bijective function). Suppose I start at a point

and consider the sequence of points

. Essentially, I start at the point

and move forward along the edges of the graph.

Notice the following: if I ever repeat a point, the first point I repeat must be

. To see this, observe that if

, and the injectivity of

. A downward induction thus shows that

This can also be seen pictorially: the graph cannot loop back to a point other than

, because this point already has an incoming edge. Thus, the graph must loop back to

itself, or not loop back at all.

is not injective, the graph can cycle back to a point other than

The cycle decomposition: cycles or chains

is a finite set and

is a permutation of

, we know that if we start moving along from any vertex

along the graph, we'll eventually repeat a vertex. The remarks made above thus show that we get a cycle at

is infinite, cycles are not the only possibility. It is also possible that applying

repeatedly never returns to the original point. An example is the translation map on the group of integers: the map

. Here, iterating the permutation keeps the point moving to the right, and there is no looping back.

If there is no looping back, we can also go backward for an infinite duration without looping back. For instance, for the map

, for which there is no looping back, the inverse map

also has no looping back. Thus, instead of a cycle, we obtain a straight chain extending indefinitely in both directions.

Note that for an injective map (as opposed to a bijective map) there may exist chains that extend indefinitely in the forward direction, but can be extended only to a finite extent in the backward direction. An example is the map

on the set of positive integers.

We've seen that starting from any element

, we can trace either a cycle or a chain containing

, obtained by following the flow of the edges. Explicitly, the cycle of

gives, in (cyclic) sequence the points

Since every element has its own unique cycle or chain, the cycles and chains form a partition of the whole set

. In the finite case, there are no chains, so the set

is partitioned as a union of disjoint cycles.

Here is another way of thinking about the cycle decomposition. We start with a point

and trace the cycle of

. Note that for any point in the cycle of

. Now, if the cycle contains all points of

, we are done. Otherwise, pick a point not in the cycle, and trace its cycle. This cycle cannot intersect the previous cycle, since that would contradict the fact that there is a unique edge coming into every vertex. Thus, we get a new cycle, that covers some new elements. We repeat this process until the whole finite set is covered.

In infinite sets, this repeat until idea cannot be used in a naive sense, but the more sophisticated idea of being in the same cycle as an equivalence relation works.

be the group of integers modulo seven under addition. In other words, we have:

We want to determine the cycle decomposition for

First, we compute the images of all the elements of 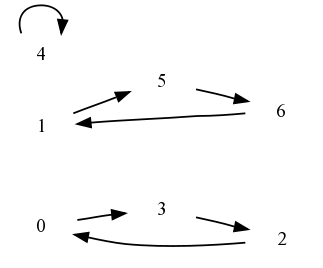 Notice that the cycle decomposition makes clearly visible some things that are not so obvious otherwise: there is exactly one fixed point (the element

, which has a loop around it) and there are two cycles of size three each.

For this, we obtain:

We now make the cycle decomposition:

From the cycle decomposition, we see that there is a 4-cycle

The individual members of the cycle are preferably separated by commas, although some abbreviated conventions allow for simply writing the members without separating symbols.

For instance, the permutation described above on the set

The cycle decomposition of this is written as:

The order in which the individual cycles are written does not matter, so this is the same as:

Finally, within each cycle, the ordering of elements can be permuted cyclically, so

can be rewritten as

. However, it is not the same as

, because the latter sends

For the second example:

we can write the cycle decomposition as:

Thus, there are two sources of ambiguity in the expression for the cycle decomposition:

When writing the cycle decomposition, we can omit cycles of size 1, i.e., fixed points. Thus, the permutation above:

can be written as:

Cycle type of a permutation

The cycle type of a permutation is the information comprising the sizes of its cycles. For instance, if a permutation has two cycles of size three and one cycle of size one, we say that it has cycle type

Cycle types of permutations on a set

Unordered integer partitions of the size of the set

A few things should be noted carefully:

Computing the powers of a permutation

The cycle structure of a permutation is a very convenient tool for computing its powers. For instance, to compute the

power of a permutation, we simply start at a vertex, and flow along the arrows in its cycles

steps. To compute the inverse of a permutation, we go backward along the cycle.

For instance, the dotted lines below demonstrate the cycle decomposition of the inverse permutation to our first example: 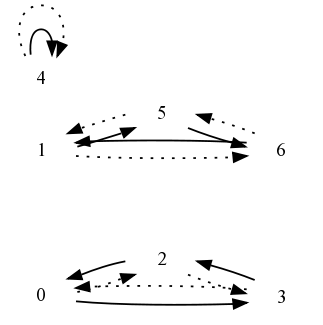 Note that fixed points remain fixed points, so they do not need to be written on either side.

Next, we show how the square of the second permutation is computed, with the dotted arrows representing the cycle decomposition of the square permutation: 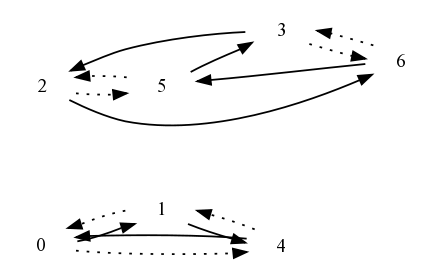 In symbols, we have:

Computing the order of a permutation

The order of a permutation is the least common multiple of the orders of all the cycles that comprise that permutation. To see this, note that for the

power of a permutation to be the identity map, it should cycle each element back to itself.

For instance, the first permutation has a cycle decomposition with cycles of sizes

. For the second permutation, the cycles have sizes