is the symmetric group on a set of size

. For convenience, we consider the set to be

The cycle type of a permutation on a set of size

is defined as the corresponding unordered integer partition of

into the sizes of the cycles in the cycle decomposition. For instance, the permutation

and the set of unordered integer partitions via the cycle type map, because cycle type determines conjugacy class.

Based on number of cycles

. The number of cycles can be any number

Based on number of fixed points

. The number of fixed points can be any number

Other kinds of classifications/groupings of elements not invariant under conjugation

All of these require a total ordering on the set on which the group acts. For convenience, we assume a symmetric group of degree

acting the usual way on the set

For most of these, it is useful to think of the permutation as a string of length

given by its one-line notation.

Here, we take a permutation

and obtain from it a binary string of length

as follows: if the

letter in the one-line notation of

is greater than the

letter, we write an

letter of the binary string, and if it is smaller, we write a

We can partition the set of permutations based on the rise/run patterns. Essentially, we are looking at the fibers of the map described above from

. One common way of doing so is to look at the number of occurrences of

. The number of permutations that map to strings with

s is termed the Eulerian number

the same shape -- the position tableau and the shape tableau. This establishes a bijection between the set

and the disjoint union, over all Young diagrams with

boxes, of ordered pairs of Young tableaux of that shape. It turns out that for each Young diagram (which corresponds to an unordered integer partition), there is a corresponding representation of

, and this representation has the same degree as the number of Young tableaux whose shape is that Young diagram.

The algorithm used in the correspondence is termed the bumping algorithm (there are many essentially equivalent variants).

This is an ordering based on a generating set for

, namely, the generators are of the form

such generators. The Bruhat length of an element of

is the length of the shortest word for it in terms of those letters. We also define a partial ordering on all elements of

. its Bruhat length is

The partially ordered set we obtain via the Bruhat ordering exhibits two important symmetries: a symmetry corresponding to conjugation by the antidiagonal (which essentially means reversing the order) and a symmetry corresponding to a left-right interchange. There is also an anti-symmetry of the lattice obtained by left multiplication by the antidiagonal element . 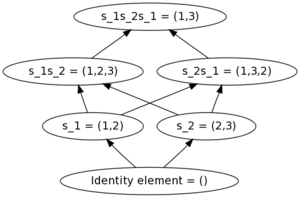