Difference between revisions of "Quaternion group"

The quaternion group has the following presentation:

The identity is denoted

The quaternion group is a group with eight elements, which can be described in any of the following ways:

Arithmetic functions of an element-counting nature

Arithmetic functions of a subgroup-counting nature 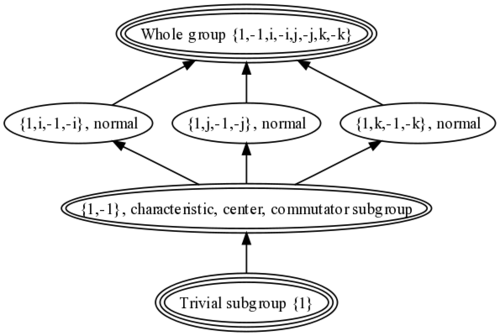 For instance, we can use the following assignment in GAP to create the group and name it

Conversely, to check whether a given group

is in fact the group we want, we can use GAP's IdGroup function:

to have GAP output the group ID, that we can then compare to what we want.