Statistics at a glance

To understand these in a broader context, see
groups of order 2^n |groups of prime-fourth order

Numbers of equivalence classes of groups

In these presentations, we use

for the identity element.

These give faithful permutation representations of the group:

Here is the GAP code verifying that these permutation representations work: [SHOW MORE] 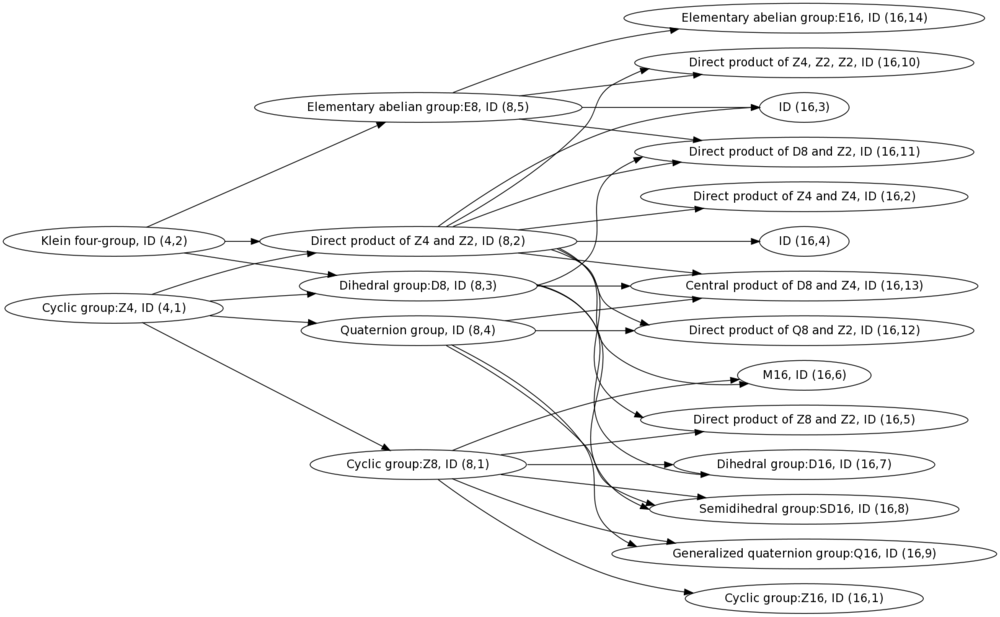 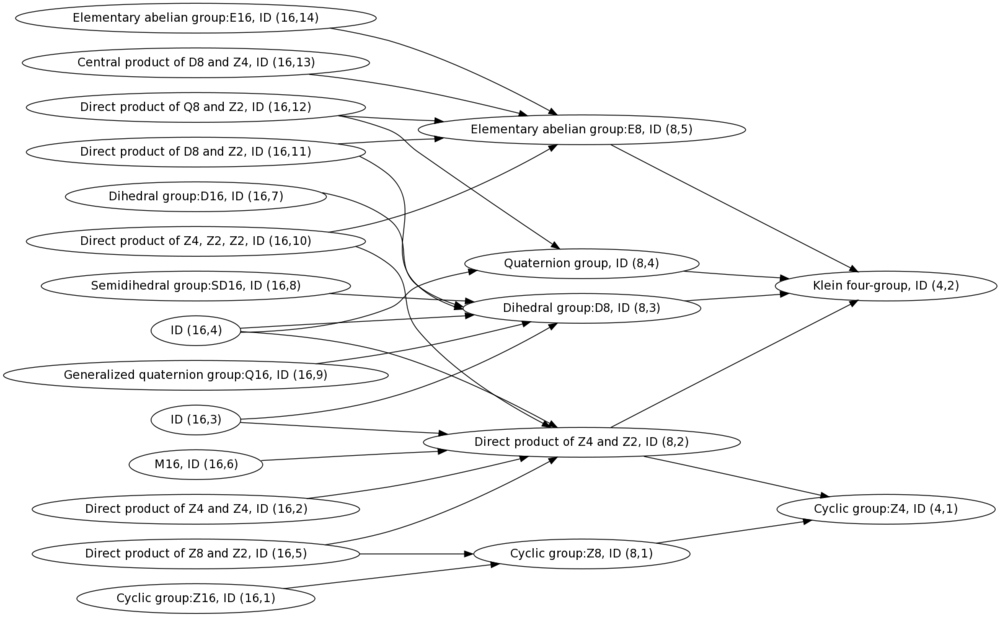 Here, the rows are arithmetic functions that take values between

, and the columns give the possible values of these functions. The entry in each cell is the number of isomorphism classes of groups for which the row arithmetic function takes the column value. Note that all the row value sums must equal

Functions taking values between 0 and 4

These measure ranks of subgroups, lengths of series, or the prime-base logarithms of orders of certain subgroups.

Here now is the same table along with various measures of averages and deviations:[SHOW MORE]

Same, with rows and columns interchanged:

Here are the correlations between these various arithmetic functions across the groups of order 16: [SHOW MORE]

Here are the GAP commands/code for these: [SHOW MORE]

For everything except automorphism classes of subgroups, the following code works. Note that you may need to load the Sonata package to access the Subgroups function.

Same, with rows and columns interchanged:

Here first is the table with the number of conjugacy classes of each size (for more detailed breakdown information, see element structure of groups of order 16). Note also that nilpotency class and order determine conjugacy class size statistics for groups up to prime-fourth order, so that there are only three types -- the abelian groups, the non-abelian groups of class two, and the groups of class exactly three:

The column headings represent the IDs of the groups:

Properties related to automorphisms and conjugacy

The equivalence classes up to being isoclinic were classified by Hall and Senior, and we call them Hall-Senior families.

Two groups have the same Hall-Senior genus if they are isoclinic and their lattice of normal subgroups are isomorphic to each other.

Up to isologism for class two

Under the equivalence relation of being isologic groups with respect to the variety of groups of nilpotency class two, there are two equivalence classes:

Up to isologism for higher class

For any class equal to three or higher, there is a single equivalence class under isologism for that class for groups of order 16, because all groups of order 16 have class at most three and are hence isologic to the trivial group.

Cohomology: piecing together from groups of smaller orders

We list here those groups arising as extensions with base group